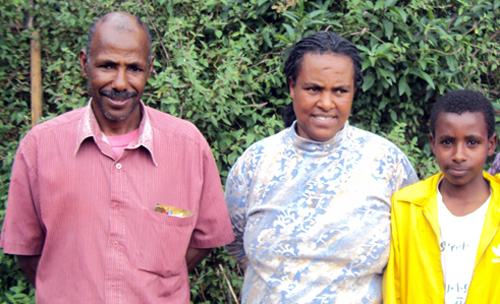 FACT:  Ethiopia has the largest population of orphans in the world: 13% of children throughout the country are missing one or both parents. This represents an estimated 4.6 million children (UNICEF)


It was as if he appeared out of nowhere.

On this particular day in Addis Ababa, Ethiopia we were visiting Emmanuel Presbyterian Church, checking out their school stationed on the grounds with grades ranging from 1st-7th.  After spending some time in each of the classrooms, we started our way back to our van to continue on our journey, proceeding to check out the other initiatives of the local church.

With 344 screaming children, frantically and joyously yelling and waving goodbye, I almost didn’t see little Beto and his brother that were walking beside us.

Timid in nature, Beto was a third grader at the school.  Dressed in that bright yellow jacket, his initial acknowledgment to us all was only the sly smirk that would emerge whenever you sought to ask him a question.

Beto quietly informed us that we were actually on our way to visit his house, the details and reasoning behind our venture however remained a mystery.

Reaching our assumed destination, we unloaded the van and followed Beto’s lead as he guided us down the dirt paved alley.  As we approached the dwelling, it was obvious Beto and his brother’s excitement was beginning to rise, being that he was taking his new found friends on a tour of that which he called home.  Uncertainty filled the air as we walked some steps behind the boys, who were now skipping along the rocky path.

We had arrived. Entering into a small gated compound, we looked up to find a quaint and simple house standing directly in front of us, with overgrown weeds to our right and an attention hungry goat to our left.  We immediately greeted those standing on the lot, unsure of their relationship to our little hosts, but with nonetheless excitement.

As we waited to enter the house, figuring this was what we had came to see, a middle age woman dressed in a long green shirt emerged from the crowd.  With a brief introduction she led us off to the left, passed the noisy goat, to a small side room.  This room, complete with one bed and one shelving unit, was in fact our final destination; this was Beto and his brother’s home.  And this woman, quiet yet resonating a great presence of strength was not their mother, but instead the guardian to the boys. It was then she began softly to give the context to the situation which we so curiously craved.

Many years ago, she was the neighbor to these boys and their parents. Though sharing not much more than proximity at the time, she explained how she grew to know the boys.  After their father’s passing from a sickness, the mother packed up their belongings and traveled with the children out to the rural countryside to be closer to her family. It wasn’t long after she too became ill and passed away.

Orphaned at such a young age, and with the extended family unable to provide for them, they were reunited with their neighbor through the church.  For her it was more important to keep the boys together, after all they had been through, and she recognized that her care was the only option.  She has now taken them under her wing, providing shelter, food, and the opportunity to attend school, taking care of them now as if they were her own.

Suddenly the perception of the situation shifted. Beto and his brothers were orphans whose life could have taken a very different turn had this woman not seen the value in actively and tangibly loving her neighbors.  Awe struck we sat, unable to formulate a response, as our understanding and emotions toward the boys had changed.  The question was then posed as to why she has taken on this guardian role with three children of her own.

With tears in her eyes, she replied that as a Christian this is a small expectation and a natural decision.  She reminded us that we, Christians, are called to love our neighbors and can’t leave it up to the institutions and the government systems to provide for those in need as God would expect; stemming from a place of love, not obligation.

She is caring for the orphans of the world. She is caring for Beto and his brother the best way she knows how, and with the utmost trust that this is what God has intended for humanity and community.