Graphic designer and illustrator Von Glitschka provides a great overview of life in the Nairobi slums.  As a member of our recent documentary team Von gives both factual and observational insight into his experience.

Von has set up his reflections as a visual journey seeing the conditions and meeting the people, we invite you to come along.

I’m struggling with knowing how to write about this experience? I want to share it with everyone, but I feel wholly inadequate to do so. I’m not even sure where to begin?

The last week and a half I spent in the Mathare Valley Slums in Nairobi, Kenya was an experience that has touched me deeply. And writing about it now brings me to tears as I think about the various interactions I had with the people there.

So I hope what I’m about to share will give you a new perspective on life in the slums. 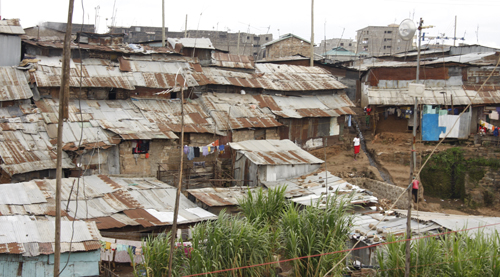 The population of Nairobi, Kenya is around 3 million. And the slums which the city encircles both in the Mathare Valley and Kibera makes up 80% of that population. So the majority of the Nairobi work force comes from the slums.

I was part of a team of around 12 people filming a documentary about the work that Life in Abundance is doing in the slums in Nairobi. My roll was mostly related to grip and gaffer duties but I was able to work with the kids from the slums too which I’ll share more about later this week.

Our days shooting were spent in the heart of the slums interacting with the people and traversing their daily environment.

The slums are a labyrinth of interconnected corridors between the haphazard constructed homes that align them.

We spent most of our time in the Mathare Valley Slums but someone has managed to map the Kibera Slums which we shot in as well.

A river slits the Mathare slums into two sides and crossing the water can be somewhat dangerous at times depending on the weather, bridge construction and of course motor skills. I almost fell in once while crossing.

Most of the Mathare slums are on a grade, so when it rains water can literally cascade down the valley through the poorly built slum homes and drain into the river. This of course makes life a lot harder and dangerous for it’s residents.

There are only a handful of paved roads in the slums and most areas are just hardened dirt. When it rains many areas become a muddy mess.

Daily life in the slums consists mostly around the essentials. Food, Clothing, and Shelter. The main street entering the slums is a vibrant marketplace of small shops such as Salons, Butchers, Repair Shops, Groceries, Food Markets, Cell Phone Carriers, and I even noticed a slum movie theatre playing boot legged Bollywood videos.

The slums have no formal grid of electricity, although some have managed to tap it both legally and illegally. I was told that the local power company in collaboration with the police do raids into the slums every six months arresting people for illegally tapping the power lines in the area.

The irony is the power company charges too much for most slum people to afford, so because they need electricity they steal it by hiring off hour power company employees to hook them up, but than they risk being arrested and fined more than what they can make in a year.

Politicians in Nairobi give lip service to the slums in order to get their votes, (somethings never change) but in many cases these same politicians make money from the slum lords that demand monthly rent from slum dwellers. To say the least this whole situation is a very vicious cycle.

Construction in the slums follows no building code. The homes are constructed from whatever is available and what ever will work. Most are made from scrap wood and corrugated tin roofing material that is patched together like a junk yard quilt.

The home pictured above is about 10 x 10 feet square, dirt floor, no running water, no electricity and is lived in by a lady named Irene, her daughter, and her mother.

We interviewed Irene for the documentary and as a way to say thanks we visited her home a few days later and ten of us crammed into the small space and brought her a bag of groceries. The thankfulness and gratitude this women showed us that day rocked my world. Her hospitality and faith was nothing short of amazing.

It struck me how easy it is from a western point of view to think we got it all together. Or think “They should be more like us.” At best this type of mindset is arrogant.

This lady despite her nasty geographic reality and the poverty she finds herself in was far more balanced than a lot of people I’ve met here in the states.

That said, I can’t say I’ve fully comprehended this paradox yet, but it’s the one thing from this whole experience that has shifted my own perspective completely.

My new friend Kelsey Timmerman was part of our documentary team and the group that visited the home of Irene and he wrote a great post about his experience in the Mathare slums. 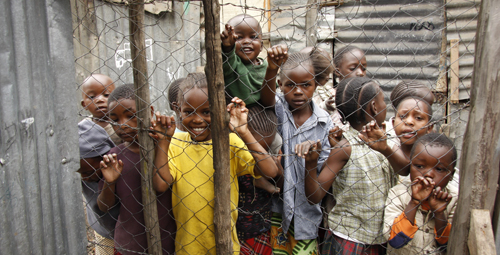 Despite the obvious poverty and living conditions the slums have a very close knit community. This is most notable in the market places. But within the various areas of the slum are distinct individual communities. I can’t say I fully understand why a community would openly toss garbage and waste out into their streets, but this is a common sight in the slums.

Areas not only look gross, the smells one encounters in the slums often trump the visuals you take in and make the experience a full sensory overload at times.

One area we walked through I had to hold my breathe for about a minute, not wanting to breath in the smell I had encountered. I was forced however to abandoned my breathing prohibition only because I feared passing out and rolling into an open sewage canal. (My buddy Justin Arhens who invited me on this journey did manage to dip his leg in one which of course was funny.)

Everywhere you walk in the slums you’ll step on trash of one sort or another. You can’t avoid it. The slums themselves in many places are actually built on top of old dumps. In places you can see the strata layers of refuse that makes up much of the slums foundation.

One day we shot near the river and this open canal running through a local community had all matter of sewage run off and waste trickling through it. The children of the slums are literally walking through this, touching it, sitting in it etc. on a daily basis. To say it is merely unsanitary is just too tame of a term to use in describing it. 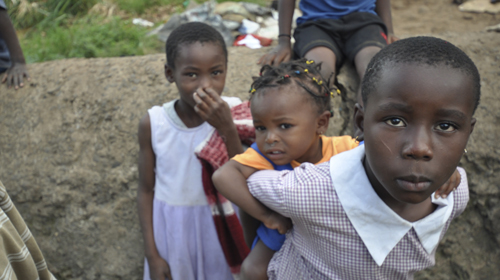 The slums are filled with children so it was impossible to navigate the slums without the constant interaction from kids. Wherever we would go they would gather around to watch and say to us “How are you?” and if we asked them in return “How are you?” they’d reply “Fine.” In all honesty most weren’t fine, they were almost always dirty, sick, and hungry.

It was very difficult at times interacting with these children only because I couldn’t help but see my own kids in them and it broke my heart knowing how they were having to live as compared to my kids safely back home. This would be the hardest part of this whole experience for me.

But the slum kids also proved to be the most rewarding as well.

You can read more about Von’s experience from his blog.  Also, take a look at the creative t-shirt “Leaving My Comfort Zone” Von designed specifically to raise awareness for the team’s trip.

Next week we will continue our “How Are You” blog series with reflections and insights from documentary team members; author Kelsey Timmerman and Bob Davidson.